Made over 1800 Kilometers to Ho Chi Minh!

Tim:  We were a little bit aprehensive about the ride into HCM a city of 7.5 million people. Traffic was dense, but with all of our experience the driving wasn't too much of a challenge. Thankfully the iphones work very well over here and we are able to use the GPS maping to find our way around. In the last few days we have seen evidence of numerours motorbike accidents. Thankfully they did not include us.

It took a few minutes to find a good place to stay. We decided on Royal Saigon Guesthouse for $14 a night.

We had posted an ad on craigslist to sell our motorbikes. We got a hit earlier in the day from two foreigners who taught English. They seemed interested and planned to come back the next day with their friend to take another look. In our craigslist ad we were asking $325 each for the motorbikes. We paid $316 for them two and a half weeks ago. We'll see how it goes.

Our hope is to sell all three of the motorbikes and the mover further southwest towards Cambodia. We have to be our of Vietnam by April 2nd to not overstay our 30 day tourist visa.

Amber:  HCMC is crazy!  It's hot, humid, and full of people.  Driving our motor bikes have become second nature to us, however, so while HCMC is almost twice the size of Hanoi, it was much easier for us to navigate.  HCMC has over 7 million people while Hanoi is *only* 3.7 million people.  Crazy!  We got in early yesterday evening, found a cozy room in a guest house, and took our motor bikes to the wash.  For $0.75 we got them clean and sparkely for the nice "for sale" signs we made out of card board and sharpie.  As we sipped on a few beers, we discussed what our lowest price would be.  Tim and Joe agreed that if hard pressed, $200 would make them happy.  I was greedy and wanted at least $250 for mine.

Two guys were lined up to view the bikes thanks to the add we posted on Craigslist the evening prior while in Mue Ni Beach.  We had posted for $325 each.  Tims and my bike are 100cc, Joes is 110cc, so pretty comprable.  We had stated that we would give a discount as well as our racks, helmets, etc if they purchased all three together.   They arrived at seven and immediately were impressed with Tim's Honda Dream and Joes Honda Wave.  My bike was not even given a second glance aside from an off hand 'who's bike is this one' from one of the two potential buyers.  We're not sure if it's because it's a slightly ugly bike, or if it's because a woman drove it.

It was dark and full on rush our traffic, so our two potentials agreed it would be best for them to come back in the daylight with a friend that knew something about bikes.  They were also certain that they had a buddy that would be willing to take a look at my bike, as well.  After they left, Tim and I walked around some of the 'budget' distrect of HCMC and posted a few more flyers about our bikes.

As promised, they texted us this morning and arranged to meet us at two this afternoon.  They arrived with their friend that "knew something about bikes", but not a third buyer.  Tim's bike had developed an issue with its rear wheel barring and was experiencing slight engine problems.  Joe's bike was having a cronic oil leak and had a tendancy to lose RPMs at highway speeds after long periods.  Both Tim and Joe had invested about $45 each into their bikes in problems that weren't 100% fixed.  The gas milage was consistantly better on my bike and the only issues I'd had with it were two flat tiers and a front break I had replaced.  For about $10 total.

I assumed that it would be my moment to smuggly watch as the 'knowledgable' bike man looked at Tim and Joe's bikes, then, after test driving all three, would see mine was the diamond in the rough.  Unfortunately, he was not as smart as I was hoping. Again, my bike didn't get a second glance, even with both Tim and Joe saying that they should really test drive mine, too.  Afraid I would start yelling "are you people stupid" if I said anything, I sat quietly as they drove Tims and Joes bike and then asked if they could go discuss a good price.

My boyfreind is a master at negotiating.  They came back, willing to give him $237 per bike.  Tim got them to buy them for $275 each!  We bought the bikes for $315 and drove them 1800km!  So, without repairs, Tim and Joe drove the entire coast of Vietnam for $40.  My little bike, sadly, is still sitting outside our guest house with a 'For Sale" sign on it.  Time to repost on Craigslist! 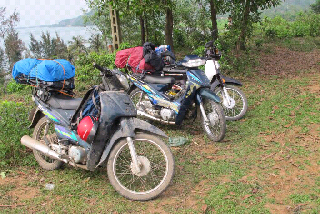 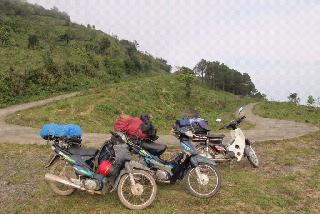