Leaving HCMC Behing: My Tho and the Mouth of the Mekong

Amber:  We sold my bike!  After a few more days of unsuccessfully posting flyers around HCMC and reposting every morning on Craigslist, we finally got a phone call.  Two Australians were planning on doing our trip, but in reverse.   They came over, took it for a test drive, and handed Tim $300 in Australian currency. They didn't even try to negotiate. The Australian dollar is doing slightly better than the American, so it worked out to be about $312.  Which meant I had driven the whole way from Hanoi, excluding gas and $10 in repairs, for about $4.00!   Yea Tim for being a good salesman!

Tim:  It's been two days since we sold the last motorbike, and we are already missing the freedom that having your own bike provides. Even though we have to pay for our own fuel, driving your own motorbike is a much cheaper option than paying for all of the taxis and buses. We left HCMC yesterday morning. Our travel arrangements just to get 65 kilometers south of the city took us about 4 hours for the whole ordeal. First we had to go to a tour company and book the ticket for US $7. Then we had to wait 20 minutes for our transfer taxi to pic us up. The transfer taxi ended up being two motorbike taxis which wasn't too bad. After a 10 minute motorbike taxi ride we waited at  transfer station for 20 more minutes before getting on our bus that took us to the main station. This bus ride took us only 15 minutes. Once at the main bus station we had to wait 45 minutes for our mini bus. Amber and I got the worse seats on the mini bus (a 15 passenger van) all the way in the back with the backpacks shoved underneath our legs. A few minutes into the ride a final passenger got on to fill the seat next to us. Our water bottle cap came off and poured water on the seat and soaked Amber's behind. Small altercation broke out between us about whose fault it was. The minibus was really hot too even though it had AC. Temps are getting into the 90s every day here. When we arrived an hour and a half later in My Tho pronounced Mae Thaw. We had to jump on two more motorbike taxis who took us to the wrong hotel outside of town where they get a commission. All that said, motorbikes are a much freer way of traveling.

Our last night in HCMC we ate dinner at an Italian food chain called Pepperonis. We opted for the all you can eat buffet for $5 each. This worked out well because Amber and I had not eaten lunch. I'll just say we got our $5 worth. While sitting on the second floor balcony of the restaurant we saw to other bike travels looking for a room on the street below. One was driving a huge 4 cylinder road bike and the other was driving a large 250cc dirt bike. Both were decked on in full riding gear including full face helmets, riding pants, riding boots, and a riding jacket. The three of us had just finished 1800 km on second hand 100cc motor scooters usually wearing flip flops and shorts.

Amber:  After getting scammed into staying at a hotel, we walked the mile into town and got some lunch then booked a tour to explore some of the islands and canals around My Tho.  The hotel we were staying at had offered to take us for $20 per person.  We declined and the guy literally stalked us into town and then found us after lunch to try and get us to go with him.  I guess since we fell for staying at the wrong hotel (there is a correct, different hotel in My Tho with the same name) he assumed we'd happily go along with getting ripped off on a boat tour as well.

We ended up paying $17.50 total and enjoyed the Mekong for about two hours and even got to watch the sunset.  Our guide pulled into the bank at one point and pulled what looked like a cluster of light green, leathery skinned grapes from a tree.  He indicated we should eat them, so after a few attempts of eating the skin (tough and bitter) and the huge seed in the middle (also not supposed to eat), Tim and I enjoyed the slimy, sweet flesh of the fruit. Our guide then took us to a coconut candy store that was tucked away in a canal.  We sampled some candies and some hard alcohol that they had made from coconuts, bananas and other local fruits.  They wouldn't barter with Tim, so we ended up purchasing some banana candy and leaving the coconut wine behind.

Because we were so far from our room, we stayed in town and had dinner at a local hot spot.  A man got pick pocketed while we dined on salt water prawns and sipped on beer.  Thankfully, one of the other diners saw what had happened and the man was able to chase the offender down and get his wallet back.  I guess our precautions of keeping our stuff safely stowed payed off! 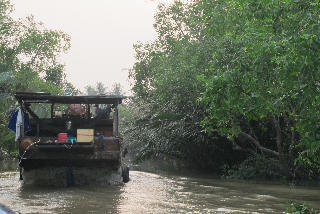 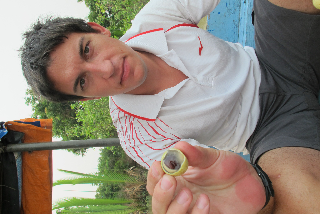 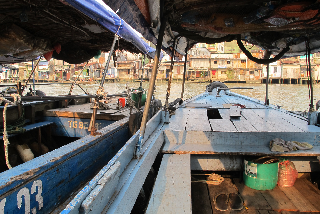 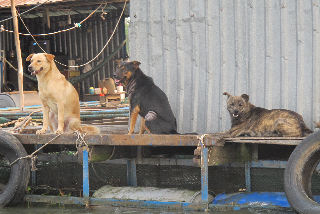 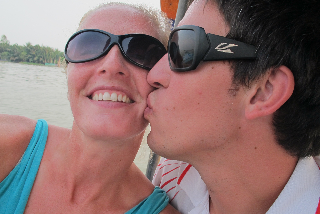 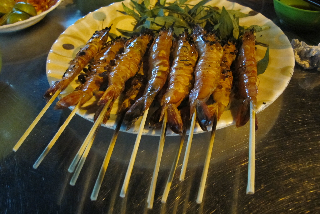 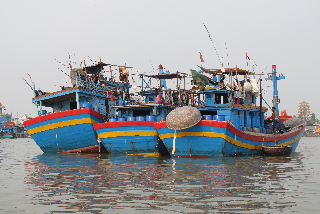 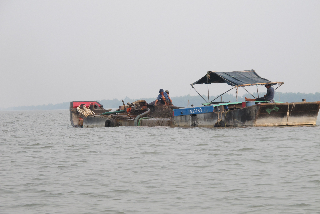 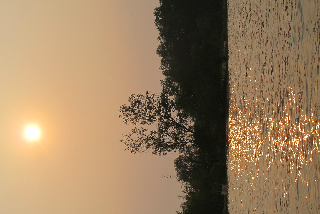 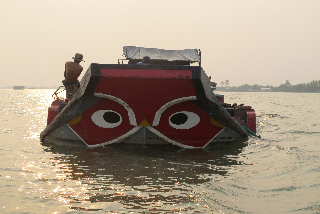 Email ThisBlogThis!Share to TwitterShare to FacebookShare to Pinterest
Labels: Mekong Delta, My Tho, Vietnam