Tim: As if Nhong Kiaw was not relaxing enough, Muang Ngoi is even more laid back and peaceful. The trip here was an hour boat ride from Nhong Kiaw. There were at least 16 of us crammed onto a small wooden boat with a slender bench along each rail. Although not the most comfortable seating, the short trip was still enjoyable with beautiful river scenery and even a few rapids that sent sheets of water into our boat. On arrival in Muang Ngoi we settled for a simple bungalow with an amazing river few. We are about 25 meters from the edge of the Nam Ou River. All this for 70,000 kip (US $8.75) per night. Electricity here is limited with most of the lights shutting off around 10:00 PM. Our guesthouse has its own generator so electricity is on all the time.

On our first afternoon here we booked a fishing trip with an independent local guide. Our fishing experience consisted of five of us in a small narrow wooden boat paddling up the river. Our guide had hired us a paddle boat and a local fisherman. We tried something similar to set netting yet this net sank to the bottom of the river instead for floating near the surface. The fisherman then used a three meter bamboo stick to slap the water to scare the fish down and into our net. The first set was unsuccessful so our fisherman moved onto a throw net. He was more successful with this method and caught several small colorful fish. When I say small I mean under four inches long. After a while we tried the set net a few more times and caught several slightly larger fish ( under 5 inches long).

While fishing we watched two wild dogs spot a single piglet on the other side of the river. The dogs swam across the river and attacked the pig. One dog had the pig by the neck. The pig was squealing loudly, and Que yelled at the pig's owner across the river to go rescue his pig. The pig's owner ran at the dogs while throwing rocks at them. The dogs took off and the piglet appeared to have survived the ordeal.

The fishing lasted for several hours. We did not get to do any of the actual fishing, but we all agreed that we probably would not have caught any fish if we had been the ones using the gear. After fishing we pulled over on the river bank, started a fire, and grilled our catch about 15 fish. This was complimented with a fine bottle of Lao Lao (whisky made from sticky rice) that was stored in a plastic water bottle. Between the five of us; Amber, Me, Joe, our guide Que, and the fisherman Aloon, we finished the bottle of Lao Lao before setting off back to town.

The bug picture is the scorpion we found in our bathroom one night, fun! I killed it with a toilet paper roll and Amber drowned it with the shower sprayer and the bathroom sprayer at the same time! 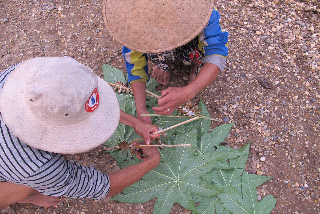 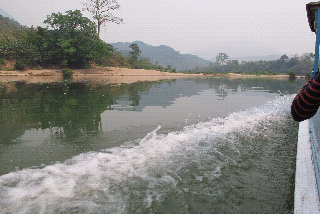 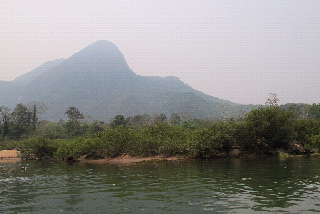 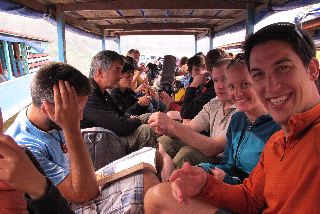 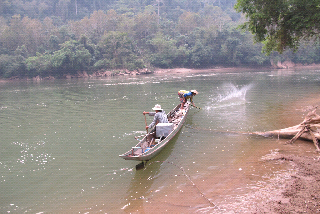 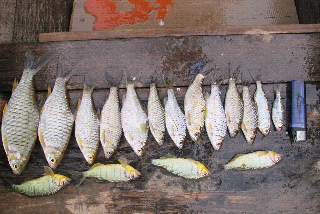 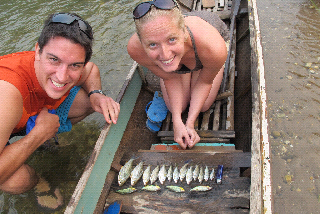 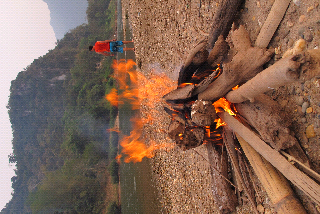 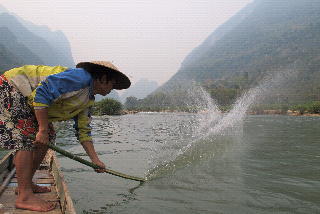 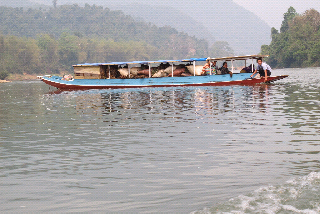 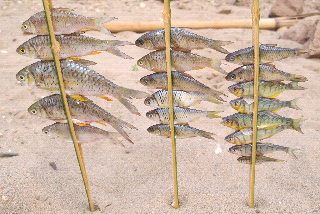 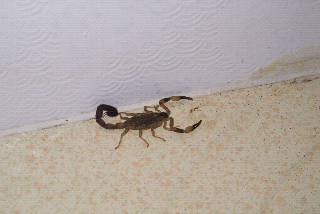