Making Progress: Made it to Hoi An

Tim: We had a pleasant time in Hue, but we needed to move on. The drive from Hue to Hoi An was the most beautiful we have had since being in Vietnam. Now that we are further south the tempertures are much warmer and we had sunshine. It was the first day we were able to take off our rain coats and warmer clothing.

The first stretch of ride took us right along a narrow spit with the South China Sea on one side and a lagoon on the other. The scenery was beautiful with white almost yellow sand. After the first few hours we reconnected with the main highway route A1. We reached a split in the highway where one route took a new tunnel under the mountain and the other older route winded through the mountains. We opted for the windy route through the mountains. It was a very steap windy road. At one point we went above the cloud level. Watching the clouds climbed the side of the mountain was an awesome sight.

At the top of the mountain pass was an old American bunker installation. There were five different bunkers that you could go inside of. There was also a very steap narrow road leading up to communication towers on the top of the mountain. A tour bus was there as well and tourist were walking up the narrow road. We took the motorbikes up the path. We had to drive most of tway in first gear because it was so steap.

From the top of the mountain about 600 meters, I coasted my motorbike all the way down the back of the pass without even starting the engine. I was able to coast for about five kilometers. This was the most fun section of road that we have down so far.

The city of Danang is located at the base of the pass. Our plan was to drive through Danang and move on to Hoi An. Danang is the third largest city in Vietnam with 785,000 people. We reached Danang at five pm at the peak of traffic hour. The traffic was insane, and you could only laugh at the number of motorbikes on the road. It is interesting that even though the traffic was very congested, we were able to keep moving at a steady pase. Most of the intersections did not have traffic lights, so it is just one big free for all! The strategy is to approach the intersection with a good amount of speed so e  other bikers don't try to pull infront of you. At the same time you must be completely aware to slam on the breaks or swerve to avoid the bikers who do pull infront of you. Trucks, buses and cars have the right of way so if you can it is good to follow beside one of these vehicles as you go through the intersetions.

After we made it through Danang, Joe started having more problems with his motorbike. The bike would lose power when trying to shift into different gears. After taking a few minute break Joe's bike seemed to be doing better so were were able to make it the additional 30 km to Hoi An.

Amber:  We started our day by looking at the arena where the emporer applauded the death of defanged, declawed tigers by elephants.  The locals maintained the grounds and kept the grass short inside.  One was literally weed eating while we took pictures!  Next stop, eunuch barriel grounds!  We went to a cemetary specifically for eunuchs; Tu Hieu Pagaoda.  While we were enjoying the sights, Tim's motor scooter sputtered and died.  As it turned out, while we were out the day prior someone had stollen his and Joes gas from their bikes!  Joes gas was nearly empty as well.  We had only gone a few km on the tank of gas we had, so mine was blissfully full.  We cut the top off of a water bottle, tipped my bike on its side, and gave Tim's enough gas to make it to the next station.

After that, the motor biking was so much fun!  The bikes were working fairly well and the scenery was beautiful.  Joe's bike, as always, was having glitches, but the only real sag was blowing my back tire as we were leaving Hue.  We were speeding through town, loaded down with our gear and making great time for Hoi An when the back of my bike went soft and started to wiggle.  My rear tire was completely flat.  I pulled over and a local laughed and pointed twenty meters up the road.  A repair shop!  I pushed it into the shop while Joe called Tim to let him know we weren't behind him.  It took the mechanic fifteen minutes to patch my tire and for 10,000 dong ($0.50) we were on our way.  The only bummer was that I had literally just replaced my rear intertube the morning prior due to getting a slow leak that had caused it to go flat over night.  Motor biking is such an adventrue!

We wound along an old, somewhat beat up road that parrelled the sea on one side and on the other, a long lagoon.  There were millions of poles sticking out of the calm lagoon that was about a mile across, several miles long. We assumed that they were fish farms of some sort.  As we continued along, Tim's bike developed a new ratteling sound that seemed to be coming from the back of his bike.  His break/rear wheel barrings were showing the wear from his first blow out and another spoke was missing.  We were stopped, peering at what might be the problem when a local just laughed at us and montioned that whatever it was, just keep driving, and we'd be fine.  With no real mechanic in sight, thats what we did.

After the lagoon, we came back to A1 which lead us up and over and back down a mountain pass.  As it was a steep, narrow, windy road, all the tour busses and semis had piled up behind one another as they crept along.  And there was road construction!  As we had our mini motor scooters, we were able to sneak past and were soon and back onto open road.  We pulled over when we saw a gas station, knowing that our destination of Hoi An would be too far for us to make it on one gas tank.  While far from empty, we were glad we filled up as the rest of the way was along the coast.  As we were pulling out of the gas station, one of the locals gestured to Joe that he would like to arm wrestle him.  I think that they thought that Joe would be a for sure win, and then the more ambitous one would then take on Tim, seeing how their progress with Joe went.  Tim never had to get involved as Joe soundly beat the first contestant while Tim and I loudly cheered in the sidelines.

There were bunkers from the Americans Anti Aircraft guns were on a beautiful ridge.  We were overwhelmed when we pulled up by three Vietnamese ladies that swarmed us trying to get us to buy their trinkets.  Each had a story to tell about their children and how we should purchase something to help support them.  When we told them we had no money, they were still persistant until another group of tourests arrived in a bus.  We had seen a local take his motor bike on the windy, steep road up the mountain, so decided to leave the hecklers and try our bikes endurance up the mountain.  First gear was the only way we could get up the incline, it was so steep and windy!  Once on the top, the fog from the ocean was completely blocking the view to the north while to the south Da Nang was obscured by haze.  After a few photos, we coasted back down the hill, bike engines off.  Although my rear break worked just fine, my hand is still sore from clenching my front break so hard.  I think it might be time for a new one! 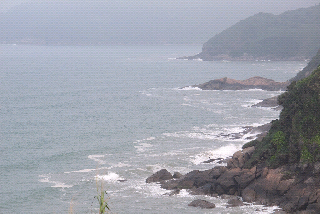 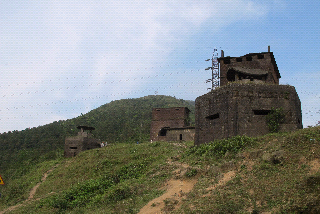 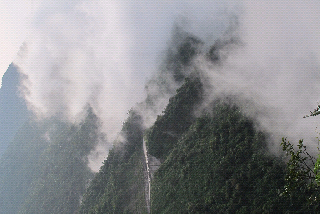 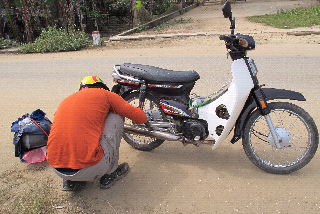 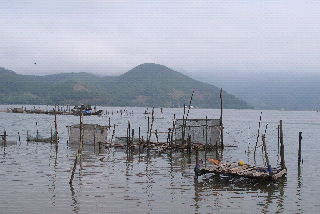 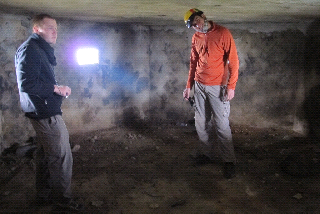 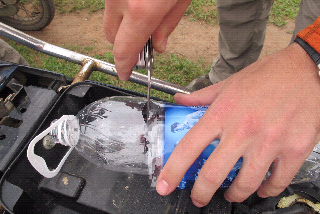 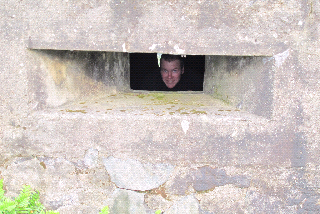 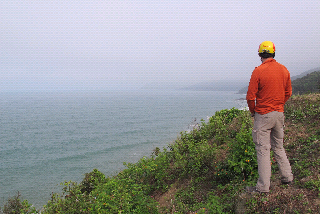 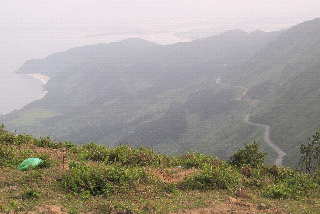 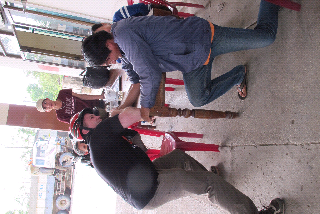 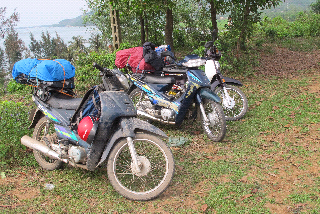 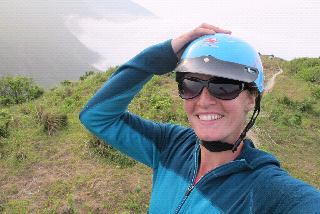