Nihn Bihn to Cua Lo then on to Vinh, Vietnam

Amber:  After our successful departure from Hanoi, we were ready to do some exploring on our bikes.  It was raining/misting consistently, so we opted to not do a full day of sightseeing but instead toured to the south east, leaving route 1A for smaller route 10.  This allowed us to still make progress towards Ho Chi Minh but get off of the somewhat terrifying main highway.  We went to Phat Diem in search of some cathedrals built in the 1800's by French Roman Catholics.  We found a Gothlic cathedral and a little further on found the more popular Sino-Vietnamese cathedral.  Both cathedrals were interesting and seemed a little out of place, but not very time consuming to view.
We were planning on staying in Than Hoa for the evening, but after winding our way along route 10, getting a little lost, and finally finding our way back to A1, we decided that we should push on for Vinh.  We had stayed in Than Hoa upon arrival to Vietnam from Laos and the city, though huge, was not even in Lonely Planet, it was so far off the backpackers path.  Not that that's a big deal in itself, but the city had proven to be incredibly industrialized, and not that interesting.
We took off down A1 on our motor scooters and it wasn't long before Tim and I realized that Joe wasn't behind us.  We pulled over on the side of the highway and watched as busses, motor scooters and cars zoomed past.  Joe eventually called and it appeared that he was having problems with his bike.  He finally caught up and while we gassed up, Tim tinkered with the valve that mixes the intake of oxygen with fuel and it seemed to fix the problem for the moment.
On we went towards Vihn.  It was getting late, and getting dark fast.  The dust had been aweful all day, but the bugs came out with a vengance in the fading light.  My eyes were burning from dust and dead bugs.  Once it was fully dark, A1 became even more exciting to drive on.  Huge busses merged fully into our lane as they passed their even larger counterpart that was apperently going just a little too slow for their liking.  Being one with the white line has never been more my main focus!
We decided that we should go to Cua Lo for the night after searching in a few small towns for a hotel and not having any luck.  We found the little resort town to be completely dead when we pulled in.  We got a room with a secure spot for our bikes, went and found some bo pho (beef soup) and a Bia Hanoi then showered and went to bed.
Today we woke up to a steady rain, so after viewing the South China Sea via soggy motor scooter, decided to drive the 16km to Vinh and get some provisions before we did anything as ambitious as drive 200km for 8 hours again.  We found our way into the city after surviving round abouts where cars and motor scooters have no problem driving the opposite direction that they are supposed to while the rest of the masses drive on through like nothing is wrong.  Happily, in such a cluster I don't think I stand out too much as an idiot driver.  I hope! 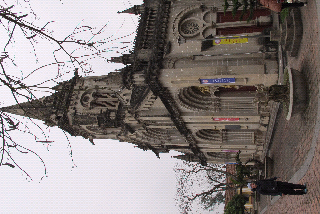 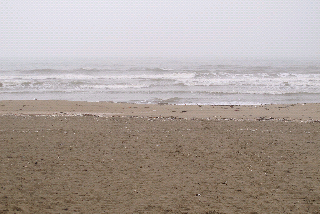 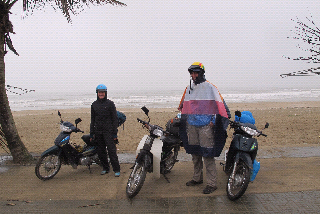 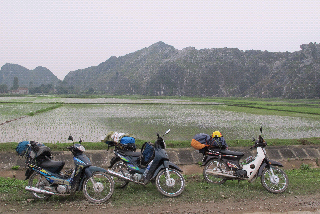 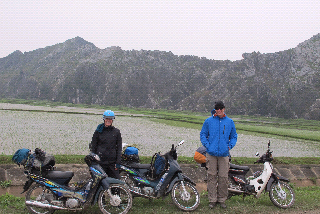 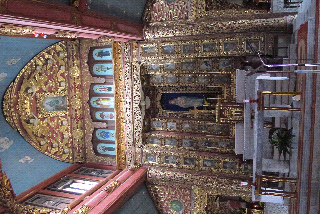 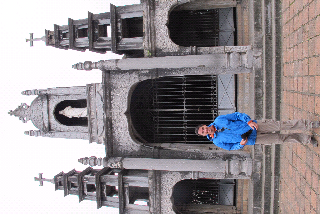 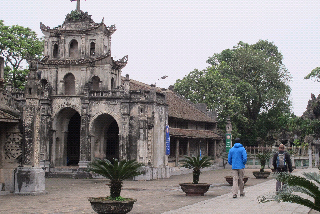 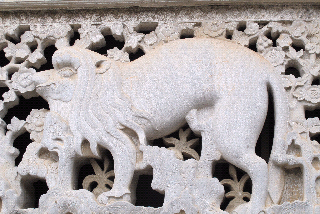