Trekking and Canoeing in Muang Ngoi

Tim: Our third day in Muang Ngoi, I did very little as I had a recurrence of the intestinal issue that we had had the week before. It is so relaxing here. Our cabana has the best view of any we have had in Asia, and we get to watch the sunset sink perfectly in between two mountains in the distance.

Amber:  Tim was feeling ill so Joe and I left him in the comforts of our little cabin and went for an hour hike to a cave and then a little further up a village.  The trail was easy and flat, winding its way through the valley floor.  We weren't anticipating the cave to be that deep so neither of us brought head lamps.  Thankfully a nice middle aged couple was taking a break outside the cave enterance and offered to let us use their small flashlight.  The lady was excited to tell us how they went in deep enough to not have the light from the enterance be viewable and then they had bravely turned off their flash light.  My favorite!  Joe and I entered the cave that was very large at first with a good sized room after the enterance with a creek running through.  We took the narrow passage way that veered to the left deep into the cave until we too couldnt see the light from the enterance.  Stopping to take a few pitures, we returned to the enterance having never been brave enough to shut off the flash light.

After thanking the couple, we continued along the path to a small, dusty village.  We were anticipating the village to be slightly less modernized than Muang Ngoi so were a little surprised to find American rap blearing from not one but two bamboo huts.  Nothing says rual Laos like a little Snoop Dogg!  We had some lunch and mint tea at a one table, one page menu resturant and returned to Muang Ngoi to check on Tim.

Tim was still feeling poorly so I settled onto our little porch to read some of my Rolf Potts book and was soon joined by two Laos girls that were very interested in talking to me... all in Laos!  There was a lot of giggling on their behalf and a lot of short question asking by me.  They had no idea what I was saying and it was extremely hot out and I was dusty from the trail so gestured to the river.  Still giggling, they followed me to the rivers edge but wanted no part in diving into Nam Ou.  Two other falang had swam ashor from the river, so the girls switched to playing with the couples flippers that they had been swimming in the river with while I swam across to the far side of the river.  The 100 yard swim was nice and cool, but I didnt stay too long on the rocky outcropping as there was a small herd of water buffalo wallowing not far off.  By the time I had swam back Joe had made it to the river for a quick swim then he, Tim and I made our way for dinner where Tim had sprite and Joe and I had a few Beerlaos with fried noodles and laap.

Tim: Today our plan was to rent kayaks, but the only place in town with kayaks said that all of their kayaks were booked for afternoon tours. This was surdprising as there were still six kayaks not being used. We settled instead for a local narrow canoe like boat. The arrangement was to have a motor boat take us and our canoe an hour up river to a nearby village and we would paddle back with the current. The current is very slow in most places so travel is slow going in our leaky canoe that had to be bailed out ever 20 minutes. The scenery was beautiful. We walked through the village where we were dropped off. Amber bought Oreos, but Joe did not bring any snacks so he bought a bag of potatoe chips at the local store. On our way back to our boat two young boys followed us down the hill and kept yelling at Joe for some chips. Joe finally gave in as we got to the river bank, but as soon as he offered the two boys some chips a host of naked children jump out of the river and came running for some chips as well. Joe was so overwelmed the he gave up his chips to the children with out even having one. So much for our snacks! 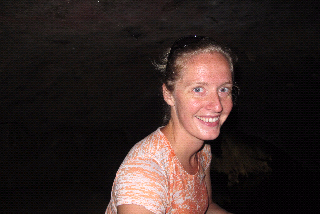 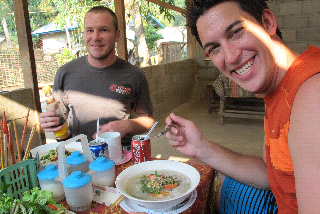 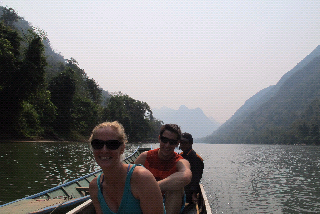 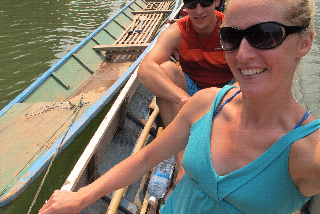 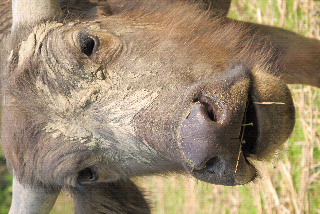 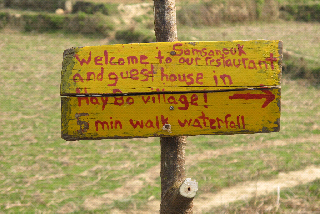 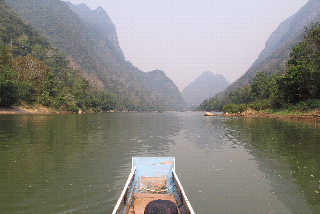 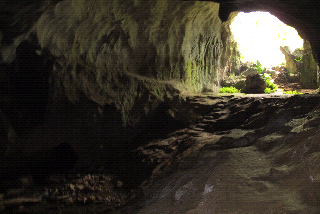 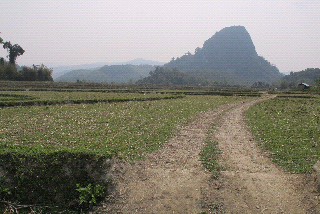